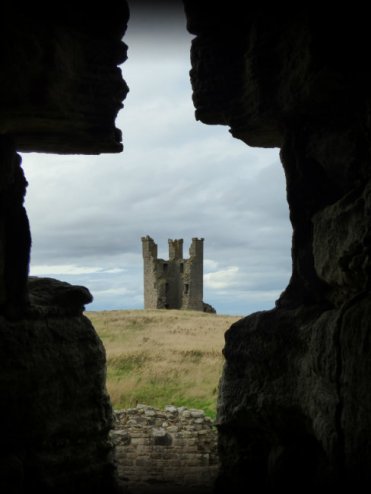 Cloaked in darkness, I stared out through the window of the ancient tower. The years had not been kind to this place; nor to me. The weather of time had eaten away at the stone and mortar of my soul, and the tower slowly crumbled in unison.

The window was small; small enough for a child to squeeze through. A brave and possibly stupid child who risked cracking their skull in a fifty-foot fall to find out why, on the nights of no moon, orange lights could be seen dancing within the rooms of the castle’s mirror image standing lonely upon Gallows Hill.

As a child, I had an overactive imagination. I dreamed of a fairy-prince, and he whispered secrets of magic to me. A portal, he said. A doorway to another realm. Small, to keep out the big-folk. Small, to keep in the fey beasts that would wreak such havoc upon the world if ever allowed to cross over. Small enough for a fairy.

I was gone for seven days. Search teams scoured the moors for my body. Police dog handlers lost my scent at the tower. The newspapers printed my portrait over and over again, their pages rife with speculation about my fate. My parents were questioned. Were six young mouths too many to feed for an impoverished collier and the wife who had a different alibi every night?

I remember laughter. Song. Dance. Food that tasted like honey; so much of it that I gorged myself until I was drowsy. I dimly recall that they took something from me, but it was something I hadn’t been using, and I knew I wouldn’t miss it when it was gone. I remember the fairy-prince who’d whispered to me through my dreams. I remember that his smile was warm but his eyes were cold.

I woke up in a home that wasn’t mine, surrounded by children who were not my brothers and sisters. It took some time for me to realise I’d been taken into care. That my parents had been found unfit in their roles, and my siblings and I had been scattered into homes up and down the country like dandelion seeds in the wind.

I never saw them again.

I lived. I laughed. I loved. I lost. I betrayed and was betrayed. Deceived and was deceived. Hurt and was hurt. And through it all, the only thing I ever truly felt, was old.

Forty-nine years later, when I finally realised what had been taken from me, I returned to the crumbling tower on the next moonless night. Stood at the window. Looked out at the lights dancing in the castle on Gallows Hill. For the briefest of moments I saw the silhouette of the fairy-prince in the window of my tower’s twin, and in that moment he was more alive than I had ever been.

Then he was gone, to whisper through some other child’s dreams.

Today’s short story was written for Sue Vincent’s #writephoto prompt, which you can read all about by clicking here. I loved this week’s image – and can’t help but imagine a mirror image of the watcher looking back at them from the castle. I hope you’ve enjoyed the story, and please check out Sue’s page for more stories and poems inspired by this picture.

18 Comments on “The Prince’s Keep – #writephoto”