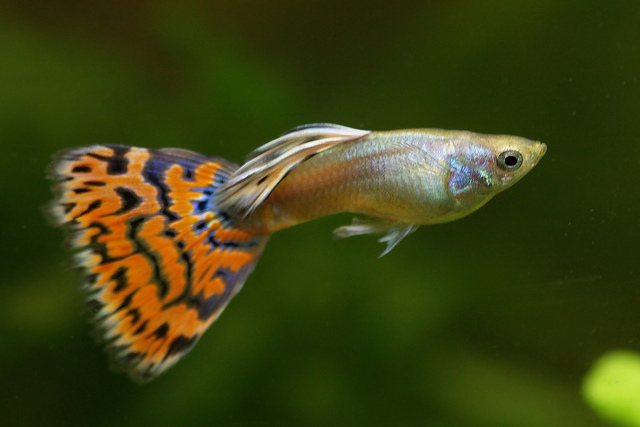 Last week, Chuck Wendig of Terribleminds asked people to suggest three-word titles for stories. This week, Chuck randomly picked ten titles and invited bloggers to write a 1000-word story based on one of those titles.

The title I ended up with was Guppy Must Die. Hope you enjoy!

“I’m getting real fed up of his showboating,” said Angel. Centre-stage at the weekly Aquarium Fish meeting was where she shined, and today the fluorescent lighting from The Great Above lent additional iridescence to her metallic scales. “The way he flashes his tail, it’s… indecent! Obscene!”

“Hear hear!” Goby swam forward, and Angel relinquished her place in the spotlight. Goby’s wide-spaced, unblinking eyes rolled back and forth as he studied the other fish gathered for the clandestine meeting in the shadow of the bogwood. “How that little interloper steals all the attention for himself, why, it’s downright criminal!”

“Ahem.” All heads turned towards Silver Dollar as she cleared her throat. Large enough to command attention regardless of where was, she had no need to move from her spot in the audience. “He’s only been here for a few days. Maybe we should give him the benefit of the doubt.”

“The benefit of the doubt?!” Goby huffed, blowing bubbles of irritation into the gentle current. “The Giver favours him quite blatantly! Yesterday, he wouldn’t even feed us until Guppy stopped playing cute with the lost diver!”

“He fawned over you, when you first came,” Silver Dollar pointed out. “All that fresh brine shrimp he provided, to help you settle in.”

“It isn’t quite the same.” Angel slid forward once more, all eyes darting back to her. “The Giver has already bought two females for Guppy, and you know what that means. Very soon, our blissful tank is going to be overrun by guppy-spawn! They’ll eat our food and steal our resting places and dirty up the place with their constant fouling. I’m not sure the filter can handle such an influx of waste. What if it breaks?”

“And you know what those livebearers are like,” one of the Danio clan chimed in.

The other fish flared their gills in agreement. Yes, they did indeed know what livebearers were like. Letting their fry swim unchecked everywhere, no respect for other fish in the tank. Everybody knew that when one guppy moved in, others invariably followed, and nobody wanted that.

“There’s only one thing for it,” Goby said. He paused, the silence interrupted only by the soft bubbling of the lost diver’s air supply. “Guppy must die.”

“But… what can we do?” Ram, peeping out from beneath the sunken galley, ducked back into her hiding place when the congregated fish turned towards her. When she spoke again, it was as an echoing, disembodied voice. “I mean, we’re just fish!”

“I’m not spineless,” Ram’s voice shot back. “I just think there has to be a better solution than fishcide.”

David whistled to himself, that annoying Cher earworm about life after love. God, he needed to stop listening to Saturday morning radio, it was terrible. He’d have that damn song in his head all day, now.

It hadn’t been a great week. On Monday, his girlfriend had dumped him. She wanted to go out clubbing every weekend, partying like she was still twenty-one. David wanted to stay in, have a couple of beers and play Call of Duty. In hindsight, perhaps he shouldn’t have been so surprised about the breakup. Carla had never liked first-person shooters.

The aquarium timer brought the fluorescent lights on with a cheery click! David smiled to himself as he grabbed the tub of flaked food and hurried over to his pride and joy.

Carla hadn’t much liked his fish, either. Said he spent more time and money on them than he did on her. Not true. Well, not entirely. Carla could take care of herself, but the aquarium needed constant maintenance. Water changes, filter cleaning, plant pruning, water quality testing, algae-scraping… all part of being a responsible fish-keeper! One time, when she’d complained about how he’d spent the entire afternoon with his arms upto his elbows in tank water, he’d asked her, What if this was our child? Would you be okay with me just neglecting it for days?

She hadn’t spoken to him for a week, after that one.

“Morning, guys, it’s feeding time!” He crouched down in front of the glass, searching the tank for the newest jewel in his crown. He’d found the rare king cobra guppy at his local fish store on Wednesday and paid a small fortune for him. Worth every penny, of course; soon he’d be breeding his own king cobras.

He couldn’t see the guppy, but the rest of the fish were clustered around the bogwood, milling in a way that looked almost… shifty. A small thread of worry wormed its way through David’s heart. He lifted the tank lid and began to search.

He found the guppy beneath the sunken galley. Somehow, the decoration had shifted during the night, pinning the guppy to the gravel. The worm of worry turned into full-blown panic when he saw no gill movement from the small, colourful fish. Fighting back tears, David reached in to right the ship and pluck out his dead prize.

“Why do you hate me so much?” he asked, casting his eyes skyward as his heart went to pieces inside his chest all over again. With a resigned sigh, he wrapped the glassy-eyed fish in a shroud of tissue and tossed it into the bin. What a waste of money.

His eye was caught by the two female guppies nosing around the top of the tank as they waited for food. Hopefully they’d been with the male long enough to be carrying fry, now. Maybe in a few weeks, there’d be a whole new batch of king cobra guppies for David to play with.