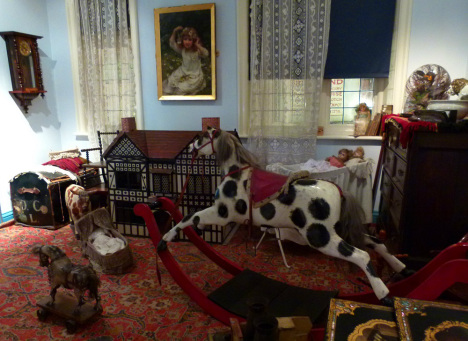 “But I’m tired of the doll house. I want to play on the rocking horse.”

Alexander’s complaint reached Maria as she crossed the midpoint of the stairs. The creak of the ancient wooden staircase beneath her feet drowned out his next words, and it wasn’t until she approached his bedroom door that she heard him speak again.

“Oh, fine. But only if it’s a story with monsters in it. Monsters that eat little girls.”

Maria knocked softly on the door, and was rewarded with Alexander’s call of, “Come in!”

When she popped her head around the jamb, she found her adopted son by the doll house, a lip-heavy pout betraying his displeasure. He’d breezed through his terrible twos with barely a cry, but since turning six, he’d become distant and distracted. Maria and Thomas told each other it was just a phase, that he’d soon grow out of it. Luckily, she knew just the thing to entice him out of his room.

“Alexander, I’m about to have afternoon tea. Would you like a scone?”

He shook his head. “We’re playing.”

“Who are you playing with, Alexander?”

Maria looked up at the picture hanging on the wall. The girl’s golden curls crowned her head, the smile on her face infectious as she struck a pose for the camera. Two months after the picture had been taken, the curls were gone. Chemotherapy had ravaged her body, ripping from it the plumpness and vigour of youth. Five months after that, Clara passed away, just a week before her seventh birthday.

Tears stung Maria’s eyes. Alexander had been asking about the picture, lately. Maria had found a sort of catharsis in talking about the daughter she’d lost. But she’d never imagined that Alexander would turn Clara into an imaginary friend.

“Maybe Clara would like a scone as well,” she suggested, blinking rapidly to clear her vision.

Alexander cocked his head to the side, pausing as if listening to something. “No… Clara wants to stay here and play with her toys. But she doesn’t want you to have afternoon tea alone, so I’ll have a scone with you.”

A smile teased its way across Maria’s lips. One of Clara’s last questions had been, “Can I still have afternoon tea in Heaven?” That was the moment Maria felt her heart break.

“Come on, then,” she said, holding out her hand. “While the clotted cream’s still fresh.”

At the door, Alexander turned back to face the emptiness of the playroom. “Alright, you can ride it until I’m done with my scone.” And with that, he left the room and began clumping down the stairs.

As Maria closed the door behind her, she heard a familiar wooden creak. With a shiver, she hurried after Alexander. Just the stairs, she told herself.

I’ve had a bit of a break from writing (and reading—sorry, people whose blogs I follow!) for a couple of weeks to sort out some RL malarkey. But I’ve found time to write this little piece for Sue Vincent’s weekly #writephoto prompt. Hope you’ve enjoyed it, and please check out Sue’s site for other excellent entries.