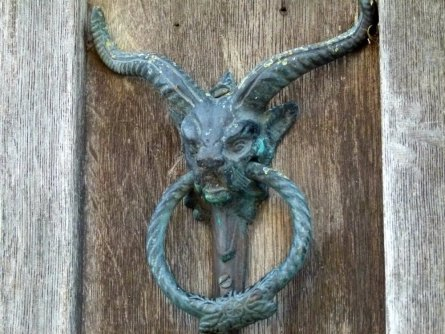 The group of histourists moved closer together as Clancy Deville led them along a familiar path through the ruins. As he walked, he pointed out features he knew would impress, and waited patiently as they snapped shots with their ocular visors. As soon as they got back to a stable extranet connection, those snaps would be sent back to Ceti Alpha and Terra Minor, where envious family members would soon be booking their own once-in-a-lifetime trips to see a little piece of history.

“Look over here,” said Clancy, directing the group off the beaten track towards a derelict house. He gestured to an elaborate iron door knocker, now green with age and weather, clinging precariously to the ancient wooden door. “This was how our ancestors announced their arrival at the home of their host. The gruesome countenance of this fellow was said to ward away evil spirits.”

A few of the group chuckled over the foolish superstition. “Oh look!” one woman cooed. She pointed to the plant that had adhered to the wall. Clancy was particularly proud of that one; it had taken several attempts to coax the ivy to grow up the trellis. It wasn’t so much cheating as adding authenticity. These people had paid good money to see ancient Earth, and he had overheads to cover.

“Yes,” he nodded, injecting gravity into his voice. “Nature is reclaiming the Earth. Soon, these ruins will be nothing more than forests and nesting sites for birds. It’s good that you came now, before it’s all gone. Now, who’d like to take a picture of themselves standing by the knocker?”

Clancy smiled as hands shot into the air. There had never been a more profitable time to be a histoury guide.

Today’s flash fiction hits two prompts. The first is Sue Vincent’s #writephoto prompt for this week. Please check out the other awesome contributions which will soon come pouring in to her site. The featured image is also by Sue.

The second is the BlogBattle prompt, Ruse.

© OoTUS — All Right Reserved. Reblogging, Tweeting and other Sharing is allowed, so long as attribution to the original author is maintained. Content from this blog may not be reproduced except where express permission has been obtained in writing from the author.
Loading Comments...
Comment
×
%d bloggers like this: