In The Mirror Chamber [Flash Fiction] 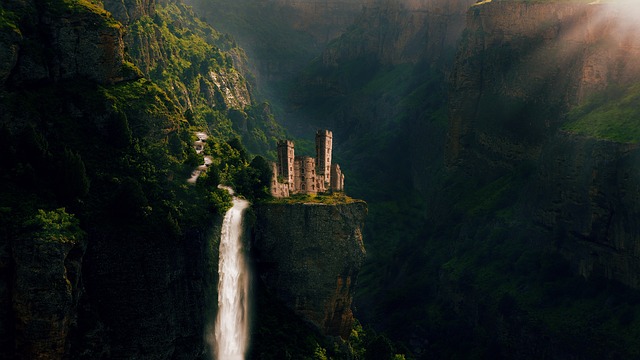 Teyin Airkin suppressed a shiver as he stood waiting in the Mirror Chamber deep within the heart of Shatterstone. No windows graced the bare stone walls. The heat of the morning sun, which bathed the streets of Seelie Court in its amber brilliance, was excluded from this place.

Dead centre in the chamber, the surface of the free-standing mirror shone coldly, throwing candlelight back into the circular room. It didn’t so much banish the shadows, as create them. Teyin had often wondered why the Magisters performed these rituals in near-darkness. Perhaps when he got back from the other side, he would finally ask about it.

The hurried patter of footsteps heralded the arrival of two men Teyin was very glad to see. Green-eyed, black-haired Dullahan Earthkin was High Captain of the realm’s Devonai guards; Teyin’s direct superior, and his close friend. Archon Livarr was Dullahan’s aesthetic opposite. His eyes, a pale shade of bright blue, held wisdom beyond measure, while his silvery-white hair was the only indication of his true age. Livarr would soon be for the Long Sleep, and the thought of it sent waves of sadness rolling around Teyin’s mind. Livarr, too, was a friend… of sorts. Probably the closest thing to friends an Onai and a Devonai could be.

Teyin offered a swift salute as the pair halted in front of him. “Captain, I came as soon as I got the message.”

“I’m sorry to bring you in on your day off, Teyin,” Dullahan offered, though he didn’t sound particularly sorry about it. “The Prime Minister himself requested your assistance with this one.”

Teyin nodded. Nobody refused the Prime Minister. With a gesture to the Mirror, he asked, “Something’s crossed over?”

“We don’t know for sure what crossed the Barrier, but we suspect it might be a Kelpie.” Dullahan’s face twisted into a grimace of distaste. “You’ve dealt with them before. 1933, wasn’t it?”

“Yes.” Damn. Kelpies were tricky things. Not the trickiest of beasts in Annwn, but when they managed to cross to the other side, they had a negative influence on the mental health of humans. The last time a Kelpie had crossed over and wreaked havoc on the Earth, a Prime Minster had lost his job. No wonder Akazi Estar was keen for this one to be dealt with swiftly. “What were the Border Guards doing whilst this Kelpie broke through the Barrier? Sipping afternoon tea?”

“The Border Guards report no incursions,” Dullahan said. “It seems to have been a random event. Possibly a temporary weakening of the Barrier.”

“Or,” said Archon Livarr, lowering his voice as a half-dozen grey-robed Magisters filed into the room, “it may have had help crossing over.”

Teyin’s skin turned to gooseflesh beneath his shadowy armour. He wouldn’t have put it past a Trickster to cause havoc by sending a Kelpie through to the other side, but Tricksters did not have the magical ability to cross—or breach—the Barrier. And who or what else would want to engage in such a nefarious activity?

“Whether it crossed on its own or had help, I’ll bring it back,” he assured the other men.

Dullahan gave a short, swift nod “Good. The last thing we want is another Loch Ness.”

“I’ll adapt the one I used last time. Human fashions have changed since 1933, but not by very much.”

A fair-haired Onai Magister approached, clearing his throat to announce his arrival. He offered a small bow and a greeting of, “Archon Livarr, you honour us with your presence,” before his blue-eyed gaze turned to Dullahan with rather less esteem. “High Captain.” Teyin was not worthy of an acknowledgement. The Magister merely said, “I understand from Archon Livarr that you have been to the other side twice before now, but that you have never performed the Ritual of Return yourself?”

“I’ve observed it performed by the Onai I was sent to guard, during the last incursion.”

“I’ve prepared instructions for you.” The Magister pulled a small bound scroll from the pocket of his robe, and handed it to Teyin with a stern glare of warning. “Do not lose this. The door can only be opened one way from either side. Without these instructions, you will be stranded.”

“I understand.” And he wasn’t an idiot. He knew the cost of losing the ritual. He accepted the scroll and secured it in one of the pouches on his belt.

“Be sure to follow the ritual exactly as it’s written,” the Magister continued. “If you get even one symbol wrong—”

“Come now!” Livarr interrupted in a faux-jovial tone. “I’m sure there’s no need to fill the boy’s head with such dire warnings. We all know what happens when the rituals aren’t adhered to.”

The Magister sighed. “Very well. We’re just about ready to open the door.”

“Got everything you need?” Dullahan asked gruffly as the Magister turned back to his work.

Teyin patted the hilt of the sword sheathed at his hip. “Yes.”

“One last thing,” said Livarr. He took a step closer, lowering his voice to a conspiratorial whisper. “If you have a spare moment on the other side, could you please find out whether the correct pronunciation of the word—”

“Archon, he won’t have time for research,” said Dullahan. Livarr winced. The Onai always underestimated Devonai hearing. “This is a time-essential search and retrieve mission ordered by the Prime Minister himself.”

“Yes, yes, of course. I know, I know, very important and very dangerous. You’re right, of course.” Teyin glanced down at Livarr’s hand as the old man slipped a second bound scroll into another of his belt pouches—no doubt full of questions.

As the Mirror began to hum softly, Teyin turned and watched as the symbols painted around its frame glowed brightly. The glass surface twisted and reversed, no longer reflecting light but sucking all light into it.

Squaring his shoulders, Teyin stepped towards the door.

Today I’m trying a new flash fiction challenge! Over at BlogBattle there’s a weekly… well, blog battle. The prompt for this week is Shine, and the genre style is Folklore.

A couple of years ago, I decided to write a story about fairies—and what happens when some of them turn bad. I wrote a couple of hundred words for a Terribleminds prompt (I think it was “post your opening” on Chuck’s blog, so I don’t have any of it here for you to read), then never did anything else with it. I figured this was the perfect opportunity to write a little more of that story. Just to be clear, this isn’t the opening I wrote previously. This is something brand new for the flash fiction challenge above.

Content is © The Urban Spaceman. Featured image courtesy of Pixabay.

9 Comments on “In The Mirror Chamber [Flash Fiction]”